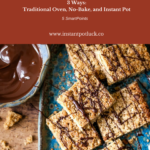 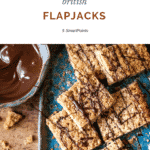 Here’s a recipe for British flapjacks — no, they’re not pancakes! Flapjacks are a British ‘biscuit’ akin to a granola bar — made with oats and golden syrup, they are light, chewy and largely good for you. This recipe also entails a few options for cooking the flapjacks — the traditional method in the oven, an option to make them in an Instant Pot, as well as a no-bake option. We hope you love this British flapjack recipe, no matter what side of the pond you’re on! 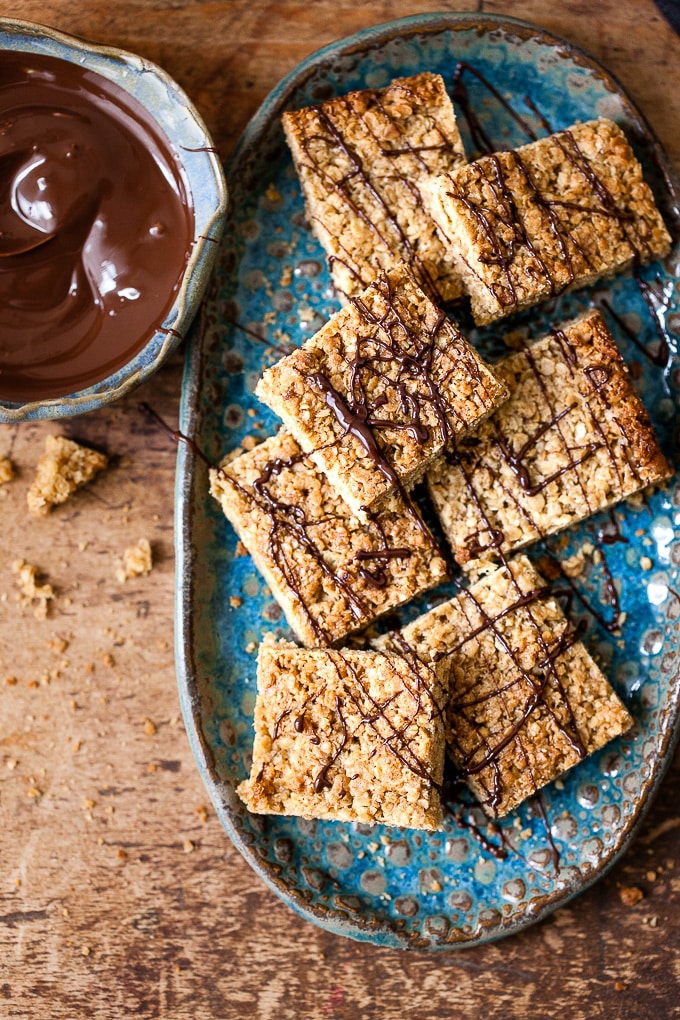 I’m an anglophile. I’ve been going to the UK since the 80’s — my mentor was from Bath and over the years I’ve developed life-long friends. I feel as at home there as I do here.  Sometimes more so. But that’s for another post. In any case, on one of my trips to visit a friend in Chichester, I took the train from London and that’s where I first discovered Flapjacks. (Despite the number of years going back and forth across the pond, when I’m in the UK driving is not one of the things I undertake. It’s not because they drive on the wrong side of the road (cue the groans and eye-rolls from my British friends) but rather, because I was born without the geography gene. I can’t find my way out of a parking lot. That said, I love taking the train as it gives me a chance to see the countryside and no matter how many times I do this, I always bemoan the fact that I don’t live near a castle.

So, the steward came down the aisle with a food cart filled with drinks and sandwiches and sweets. I looked at the offerings and the person across from me ordered a Flapjack. I thought it was odd to be ordering pancakes as they’d be rather messy, and was taken aback when they were handed something wrapped in cellophane that resembled a trail mix bar. Of course, I needed to know what it was and I learned it was a baked bar made of oats, butter, and Golden Syrup. I had no idea what Golden Syrup was so, I was encouraged to try one. Well! I was hooked. I devoured the thing in a matter of moments and the fellow next to me said, “you should try a real homemade one.” Apparently, what I consumed wasn’t even close to what his wife could make. 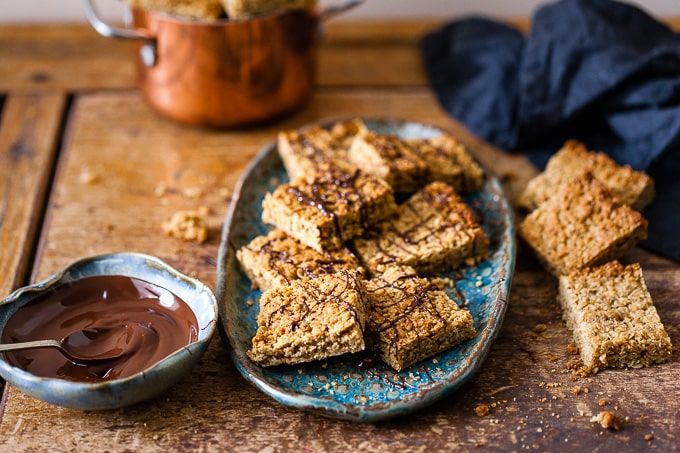 When I returned to London, I asked my friend, Jane if she knew what a Flapjack was and did she have a recipe? She looked at me like I was insane because asking a Brit if they know what a Flapjack was akin to asking an American if they’ve heard of Apple Pie. Jane is an amazing cook and baker.  She shared her recipe, which is posted below and I’ve been making it ever since. People ask if they can substitute honey for Golden Syrup. I suppose you can — but Golden Syrup has a flavor all it’s own. This ingredient just makes the recipe taste as it does: purely British. 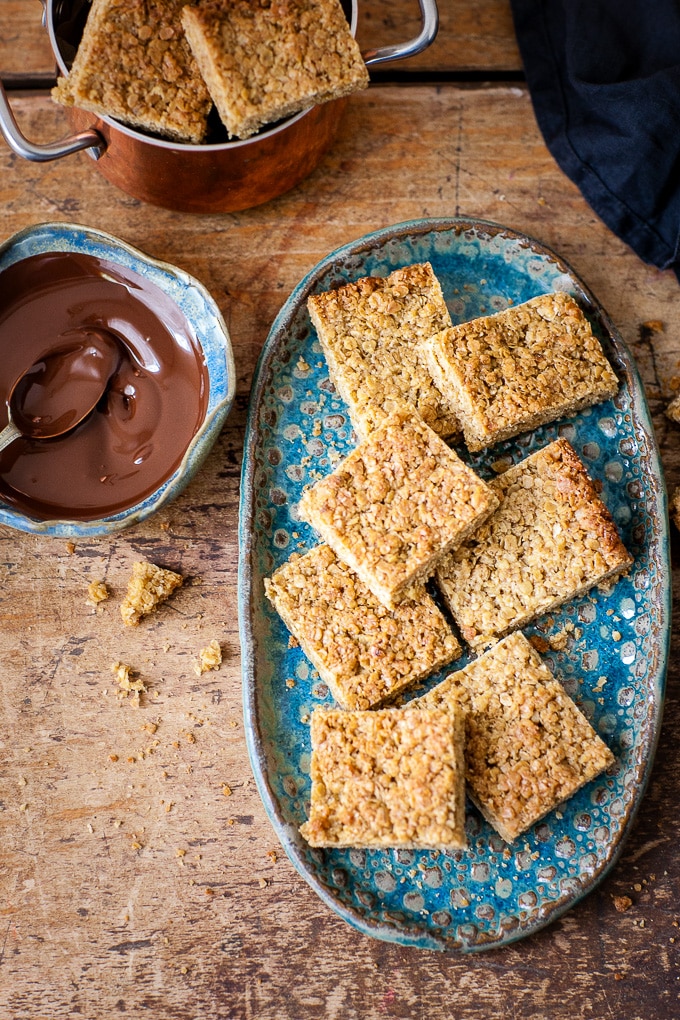 I now have a food blog and want to share recipes from my life that are truly special.  This is one of them… especially because most of my American friends have no idea what the hell a Flapjack is. And frankly, I am always looking for something unique to serve at the holidays.  (Here is another recipe that’s very American and beyond yummy — especially when you drizzle on some Golden Syrup: To-Die-For Spoon-Bread Corn Pudding

Anyway, as it turns out, the brilliant photographer I work with is British (there are no coincidences in life) and she is one of the best chefs and bakers around. Here’s Deborah Rainford Thompson, the curator of The Salted Mint and her version for a no-bake Flapjacks — along with her perspective on this most amazing treat:

Flapjacks are a staple comfort food in British culture.

Not fancy in flavour. Definitely not fancy in presentation, but like a warm hug at any time of day. Usually consumed with a cup of tea for grown ups. 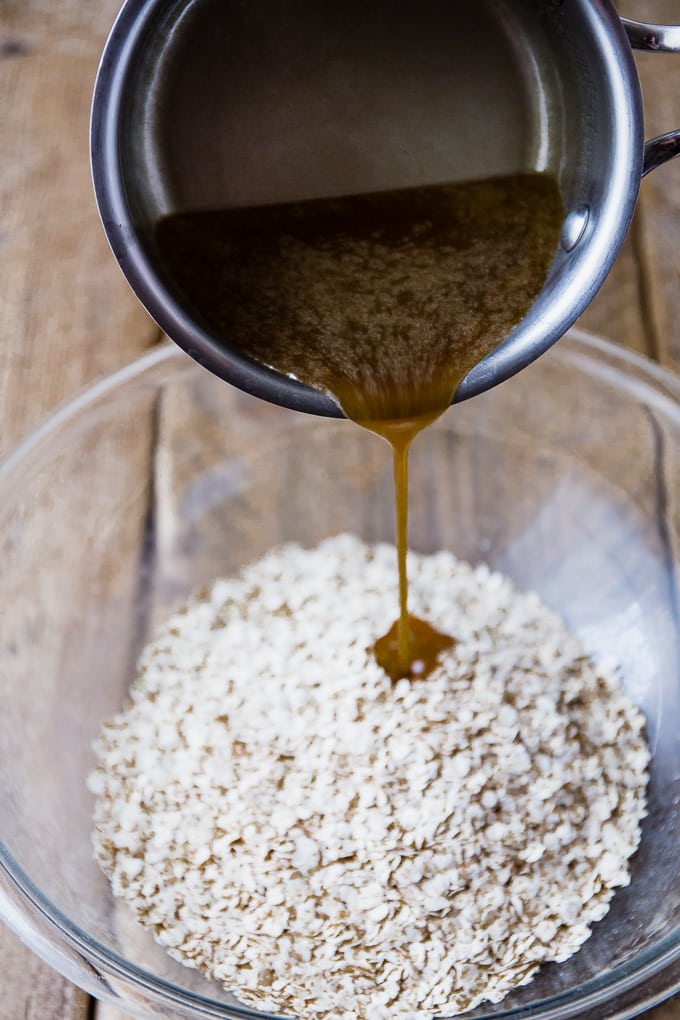 Their beauty is their simplicity. As Barbara mentioned, butter, sugar, syrup, oats. Simple pantry staples that are in virtually every British household. Even the most kitchen-shy culinary novice can make a roaring success of a flapjack.

My recipe always has a pinch of sea salt. Never enough to actually measure. Just a literal pinch. It balances out the sweet and helps to push the maltiness of the golden syrup to the fore.

The recipe would work out if you substituted honey, but it would have a high pitched sweetness. Think of sugars like a choir. Dark brown sugar being a deep baritone, and honey being a high soprano. Golden syrup falls somewhere in the middle. If you had to substitute the golden syrup due to lack of availability, then a dark corn syrup is your best bet, to get that same depth of flavour. I know that it has a very bad wrap nutritionally, but at the end of the day, these flapjacks are meant to be eaten one square at a time, not one tray at a time!

This recipe is lovely done according to the recipe, but is also really lovely as a no bake treat. Simply follow the directions up to the point of baking, then leave to set in the fridge for at least 2 hours.

For the IP version, yes, you will need to use the oven and the IP, but it makes the whole affair a lot more of a hands off process. Perfect for kitchen-shy novice cooks!

Debs, Jane, and I hope you enjoy this treat no matter what side of the pond you’re on.

Flapjacks – The UK’s best-kept secret (and no, they’re not pancakes!) 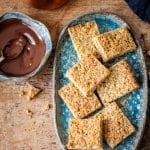 Melt the butter with the sugar and syrup, then stir in the rolled oats and mix thoroughly. Turn into a greased (I usually line the tin with baking parchment) shallow 8″ square ( I use a 7.5″x12″ tin) and smooth the surface.

Bake in a preheated moderate oven 180C (350F) the recipe says for 25-30 minutes, I normally do about 20 minutes so that they don’t go so hard. We like chewy, not jaw-breakingly hard.

Add a handful of chopped apricots, raisins, sesame seeds and, or sunflower seeds when you add the oats. Cut into slices when warm, then cool completely before removing from the tin.

For the IP add all the ingredients into the IP and sauté on the lowest setting for about 8 minutes, stirring once or twice, until all the butter is melted and the syrup is fully incorporated. Take out the mix and set up for Instant Pot baking.

Pour 1.5 cups of water into the bottom of the IP and set up the trivet.

Place the mix into an Instant Pot springform pan, place on top of the trivet, and cook in the Instant Pot for 15 minutes.

For a no-bake version, follow the instruction up to and including placing the oats in the baking pan. Then, spread the mixture evenly and leave in the fridge to set for at least 2 hours.

Cut into bite-sized portions – this recipe will make about 20 half inch slices.

For those counting Weight Watchers points, when cut into 20 mini-bites, 1 bite is 5 WW points, without the chocolate drizzle.

Serve up your Flapjacks on SlatePlates…  Made in Italy, they’re the affordable and sophisticated way to serve your desserts, cheese trays, appetizers, and more. Available in 5 sizes or a party pack… toss the fancy paper plates and serve your fabulous Flapjacks in style.

Enjoy 15% OFF with this Special Discount Code: USUK15 for friends and family here and across the pond on any of our products. 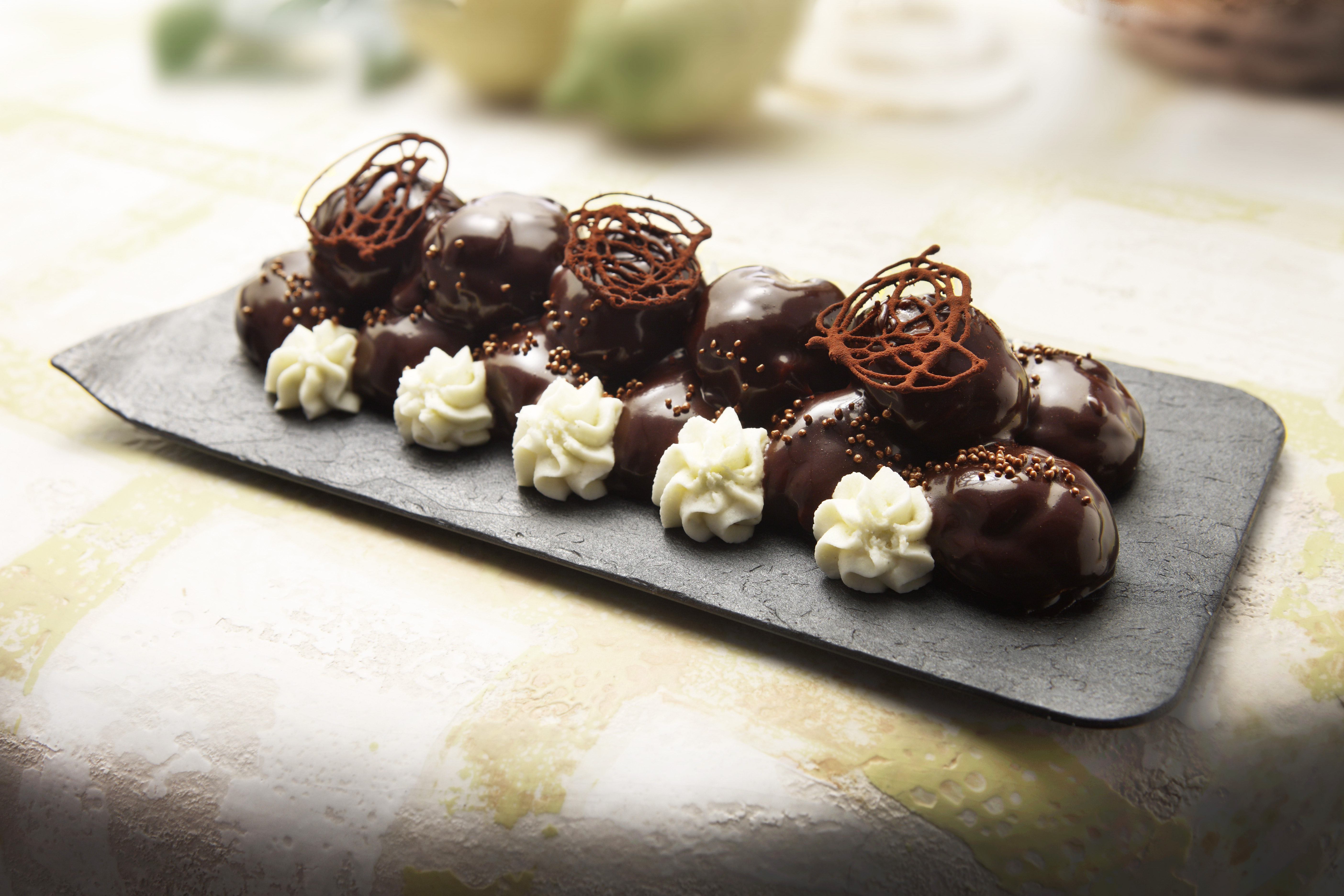 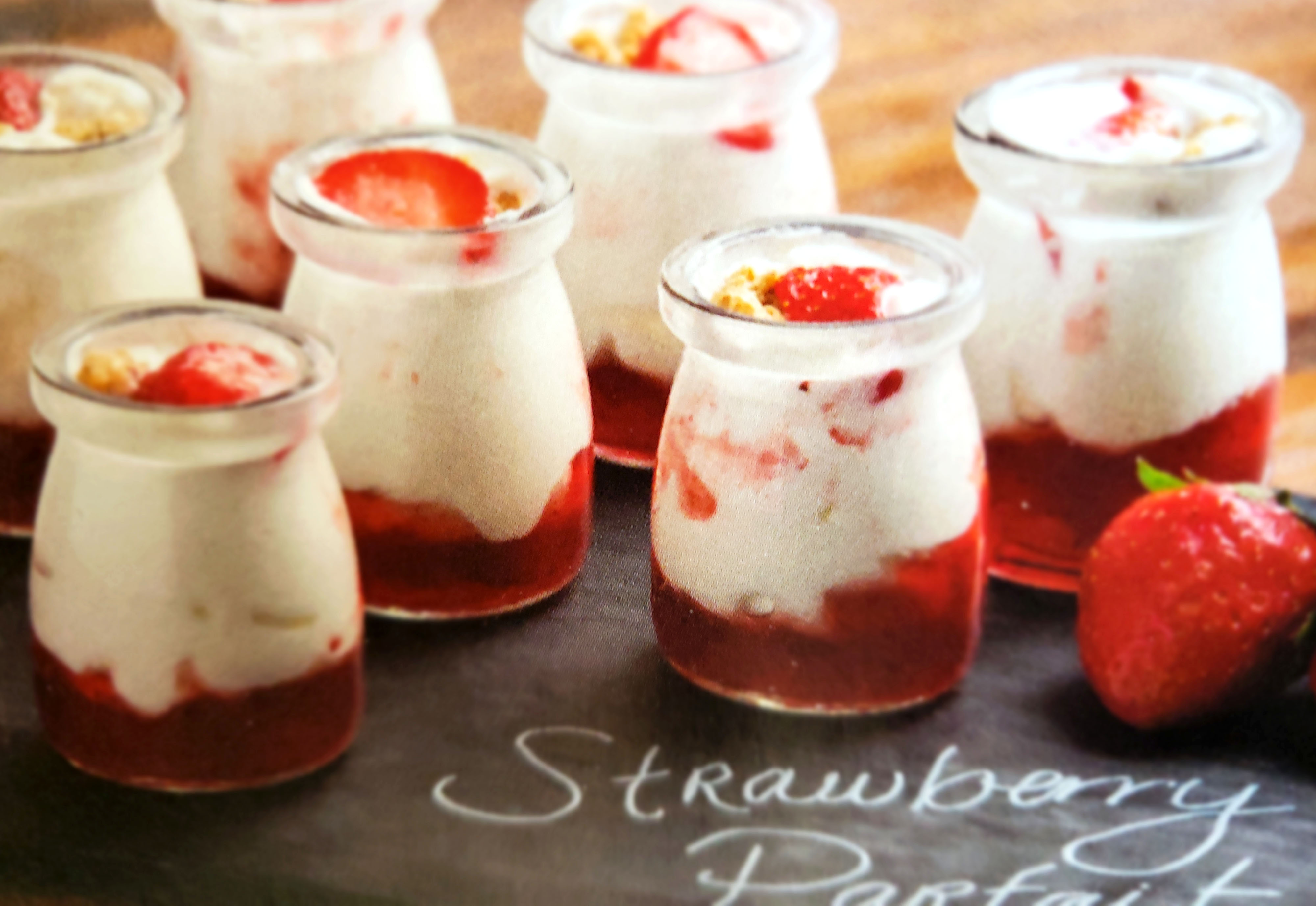 And these are a blast to make: Hot Chocolate Brownie Ice Cubes: 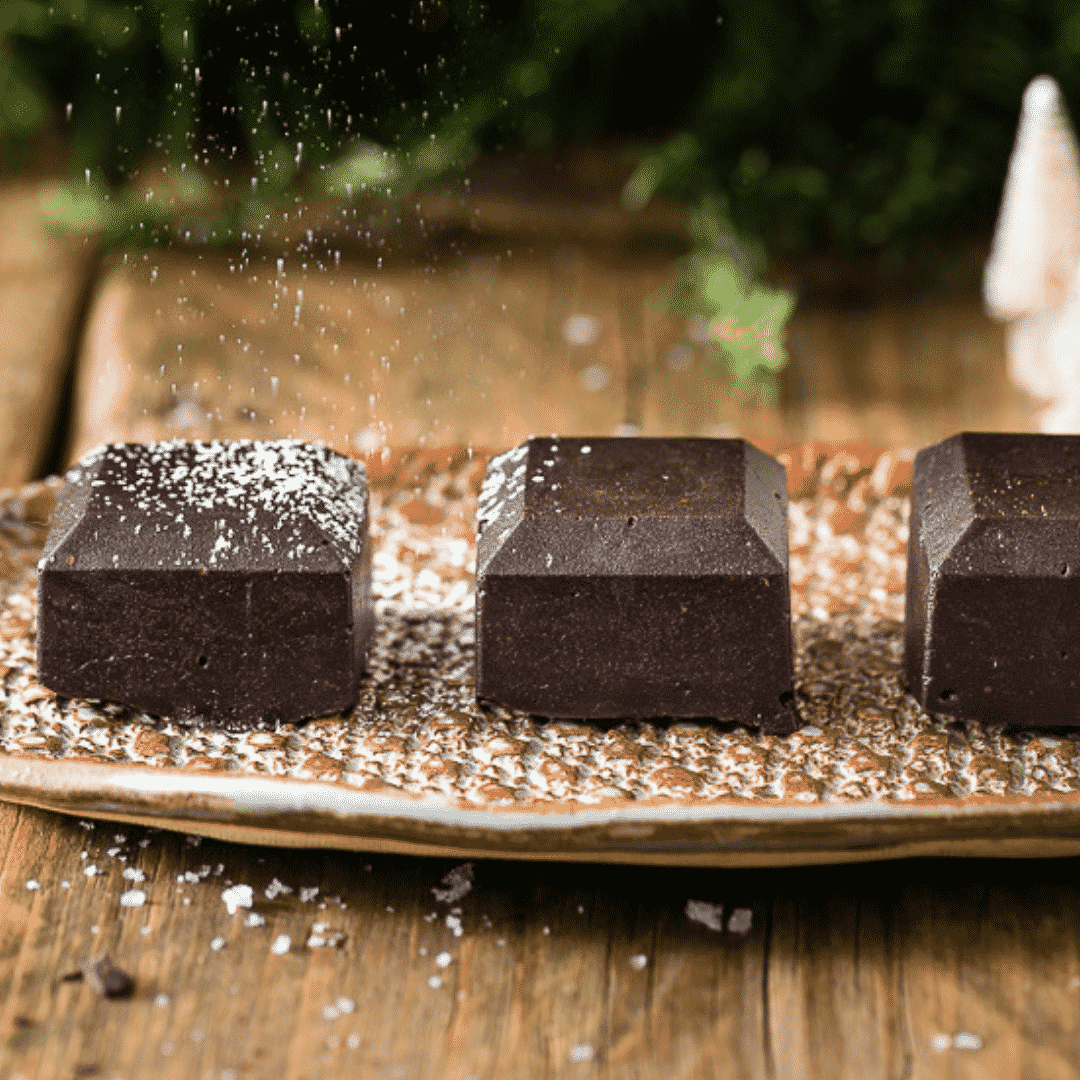 Follow me on PINTEREST… the place where I go to look for a recipe and end up considering which Tiny House to buy.

Check out the new line of gifts and accessories I created especially for you, the home chef.  From serving ideas to eco-friendly clean up, and a few surprises… 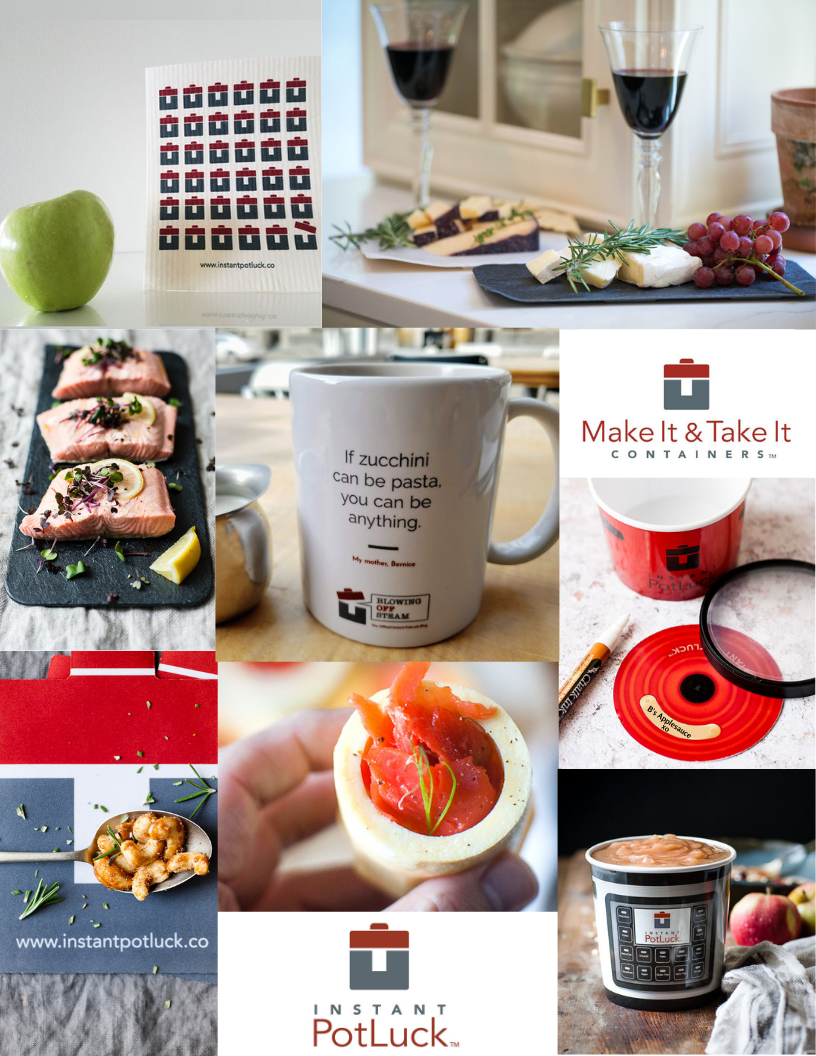