You are here: Home / Blowing Off Steam / Death by Brie – The Appetizer. 5-Minute Instant Pot Recipe

I was traveling to Lake Geneva with a friend a few weeks ago… we headed to the land of cheese as we wanted a quick getaway from the city. We popped into a favorite local restaurant Popeye’s in search of my favorite Fish & Chips, but it wasn’t Friday and we were`outta luck. That said, on the menu was an appetizer that sounded so bizarre and so ridiculously preposterous — we HAD to try it. I call it Death by Brie. Go with me on this one…

I love shrimp scampi. I love brie. The thought of these two things together is something that never — not in a million years — I would have concocted. Not even in my Studio 54 days when “unusual ideas” were acted upon in an instant. Well, cut to several decades later and I’m still willing to try anything once. (Okay, maybe twice.) And in 2018, “in an instant” has a whole new meaning.

I threw caution to the wind.. and given that I didn’t die from my youthful escapades during the 80’s, and I haven’t had a heart attack (yet) from the goings-on in the current state of world affairs, how could a little brie kill me?

Drumroll (for those still reading)…

Here’s the original recipe from Popeye’s and also my version making it in the Instant Pot… either way, it’s the most amazing appetizer… which I have now named Death by Brie. 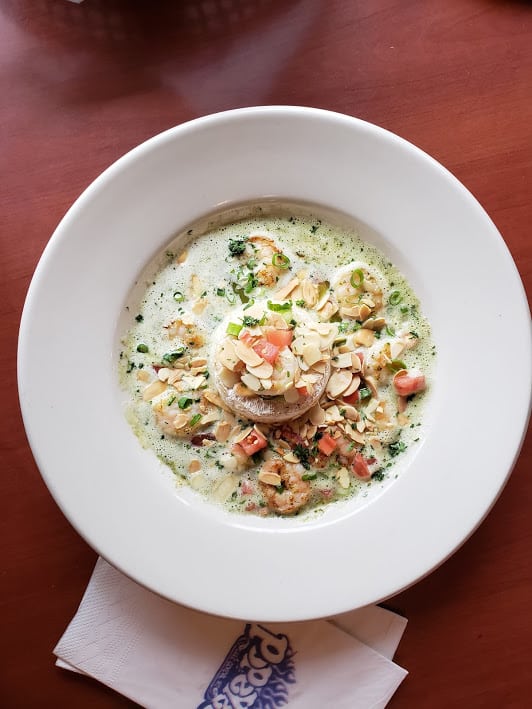 Shrimp and Brie from Popeye’s in Lake Geneva, Wisconsin

I had been looking for a unique and creative appetizer for parties and the holidays to replace the “spinach-and-artichoke-in-a-bread-bowl-thing” — that I refuse entrance into my home, and “crudite and dip” is just unimaginative… so, Death by Brie is my new thing.

If you’re on a diet, Death by Brie is probably not for you. However, my take on most things decadent is: f*ck it. (And I’m still alive to prove it.) So, have a few bites on a cracker or on a piece of crusty french bread and enjoy. Besides, after 2 bites, it’s so rich, you can’t eat any more if you wanted to. (That’s not exactly true. Okay, that’s completely not true: we polished off the entire appetizer, because it’s just that good.)

About a week later, I was still thinking about my near-death experience, and called Popeye’s and introduced myself. I told them I was in love with their appetizer and could I please have the recipe to share with my readers…  and I also asked if it would it be okay if I developed a recipe for people to make at home in their Instant Pot? Their answer was yes.

I was invited back and thrilled to meet the team: thank you to Prokopious, and Cherish, and Dimitri, and our terrific server, Cheryl. You’re hospitality is simply wonderful and I can see why Popeye’s has been a family run business since 1971. 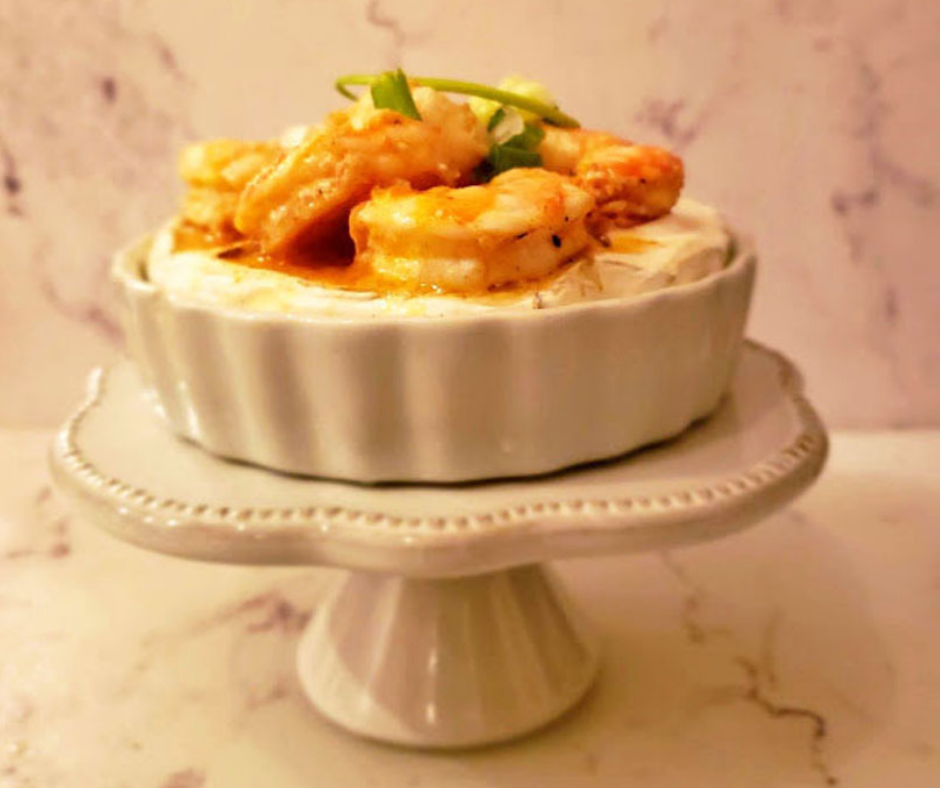 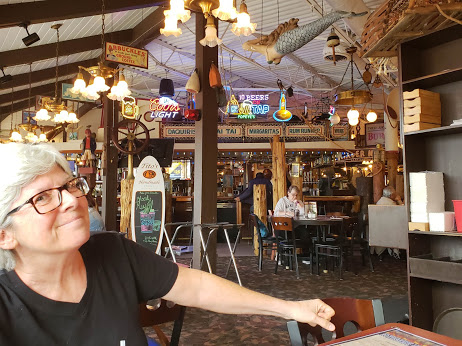 My friend, Gisele at Popeye’s. 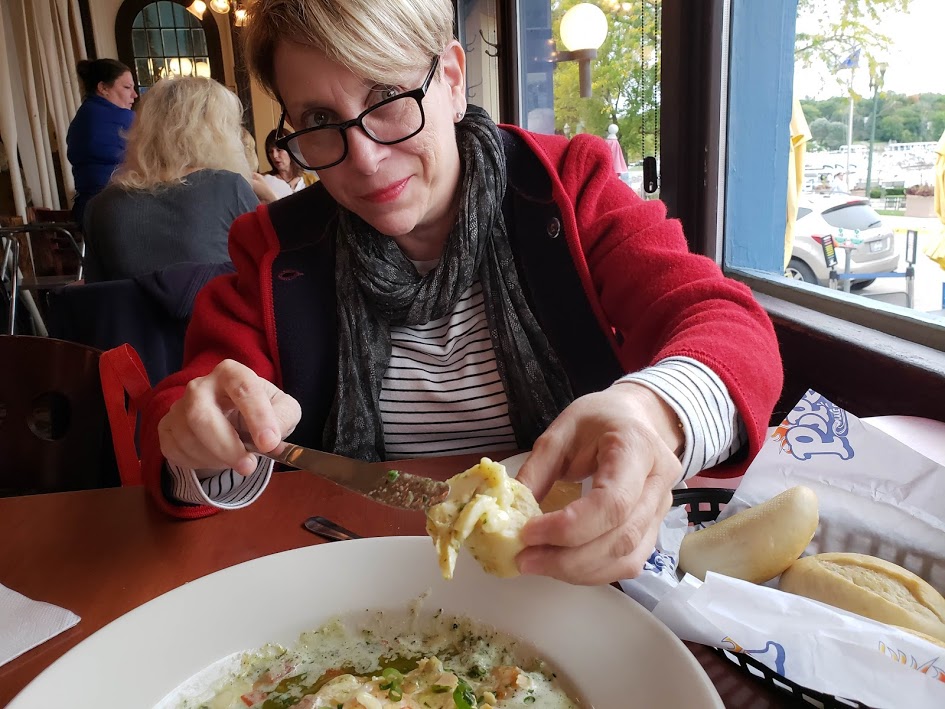 Me. In heaven. Eating Shrimp & Brie. 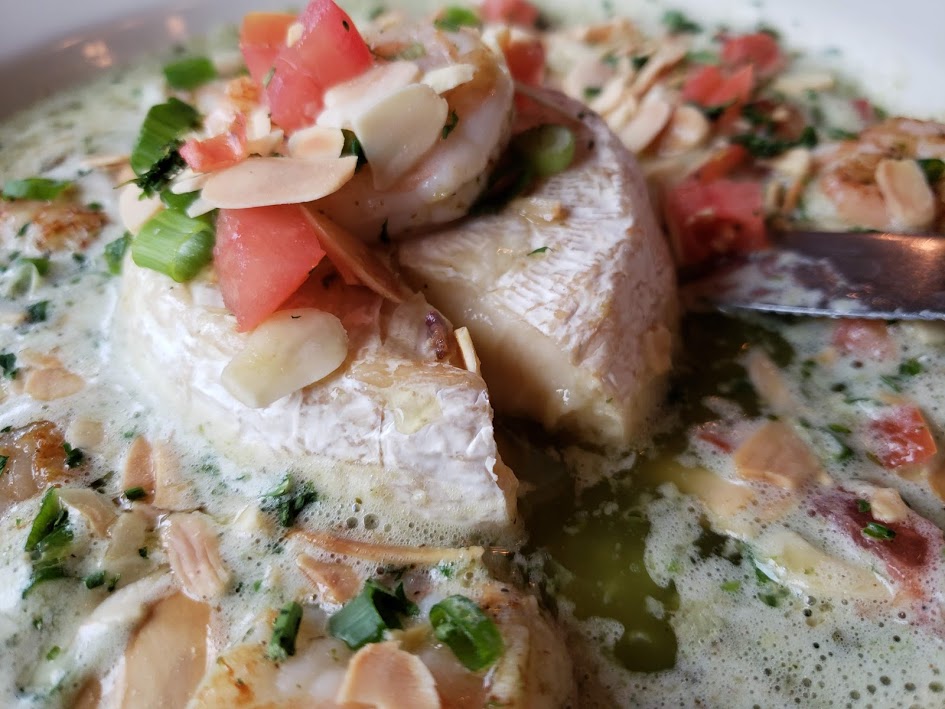 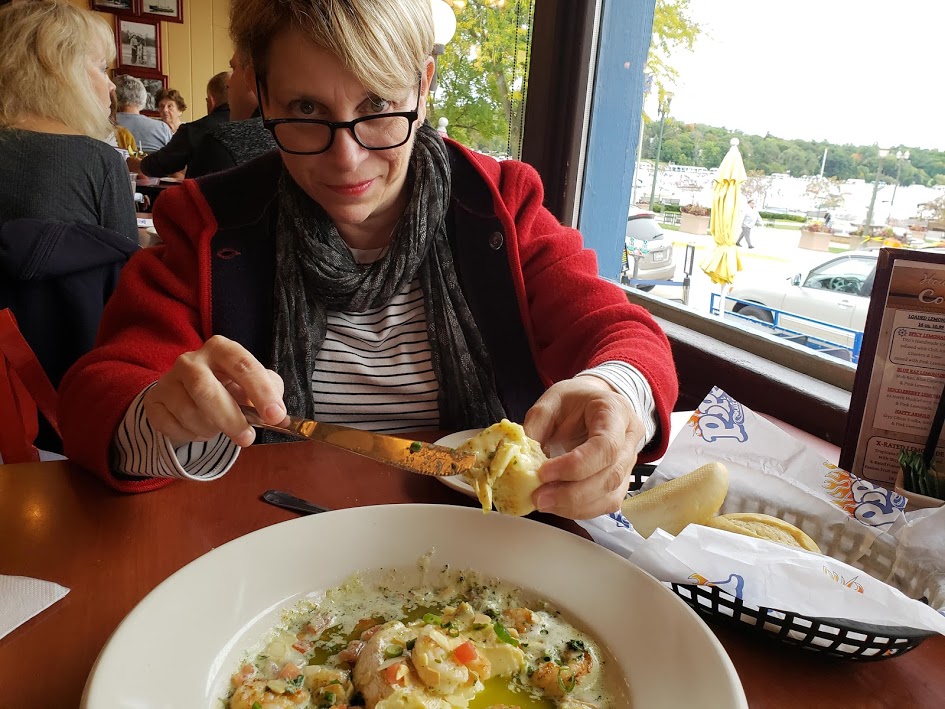 Me. Continuing to eat. 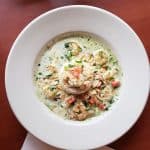 Here’s how I make Death by Brie in the Instant Pot… and this is also good for just making shrimp in the Instant Pot.
For this recipe, I added paprika and a dash of cayenne to my recipe as I sometimes like a little extra heat — but you can leave it out if you want. 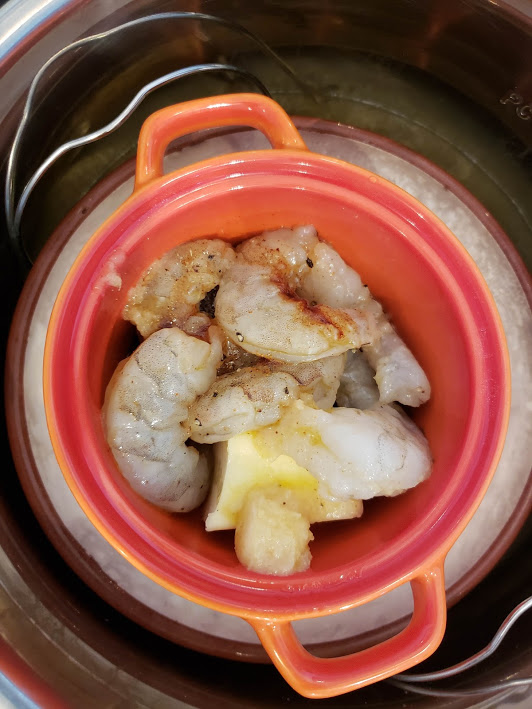 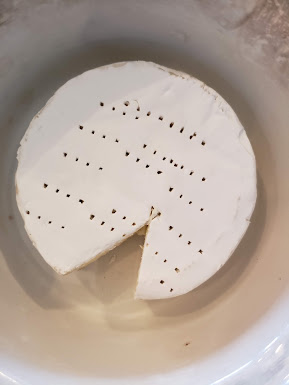 I scored the brie. I also took a section to make sure it was okay. (It was.) 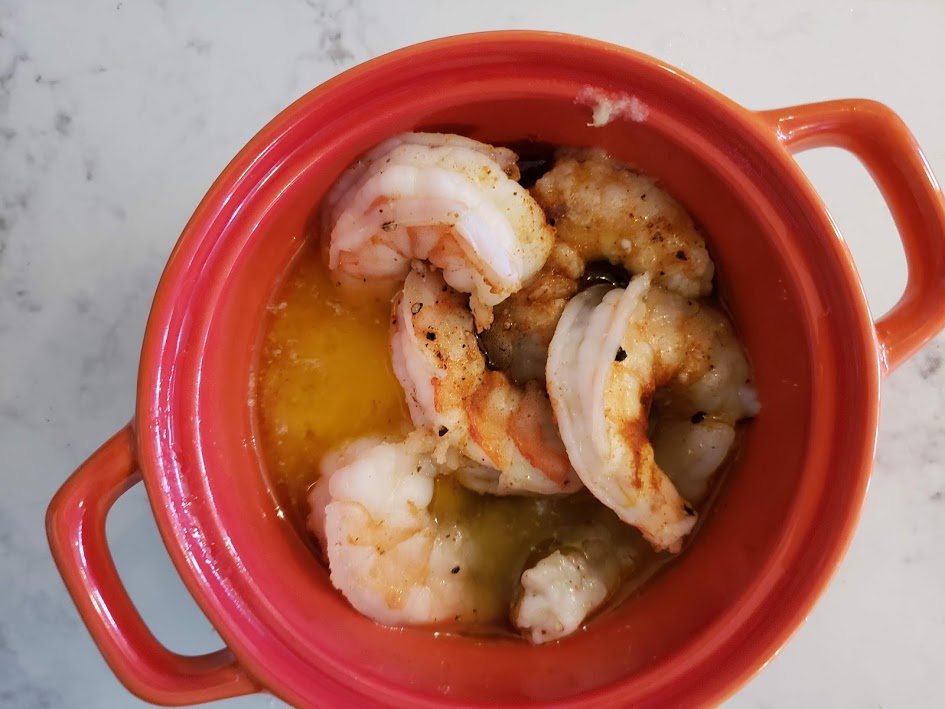 Just cooked! Our mini dutch ovens are available in 2 sizes and great for PIP and side dishes! Promo code for 10% off is below. 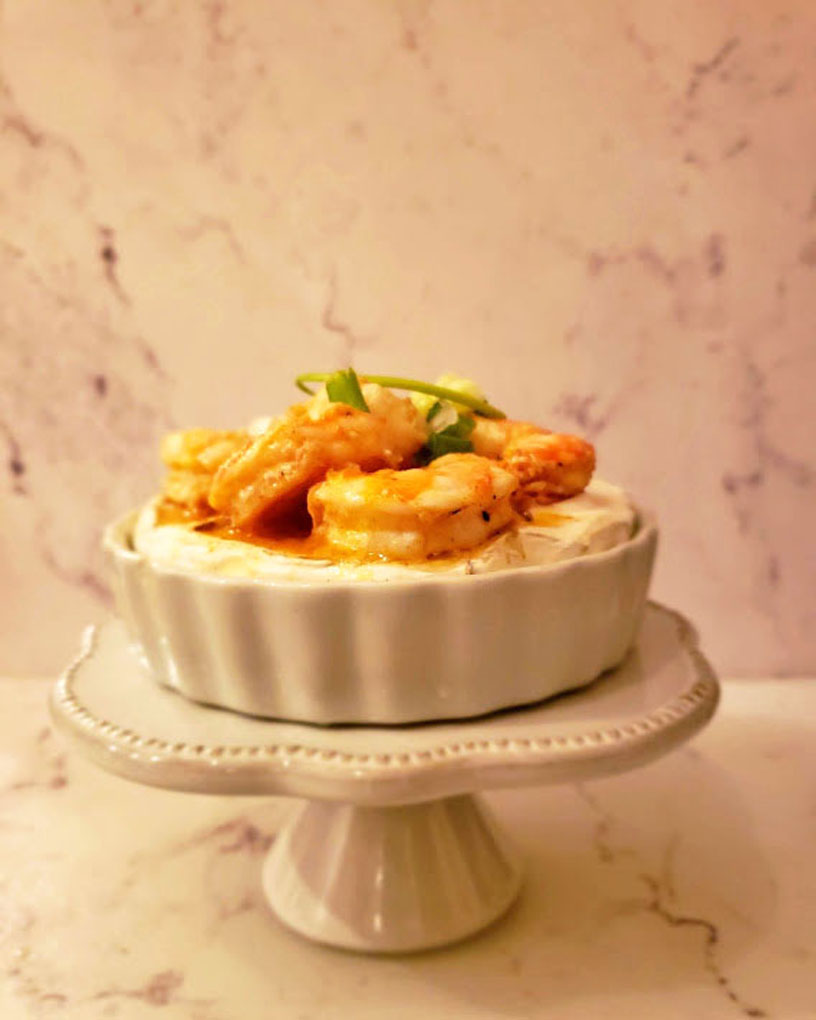 Death by Brie. On a pedestal. Where it belongs. 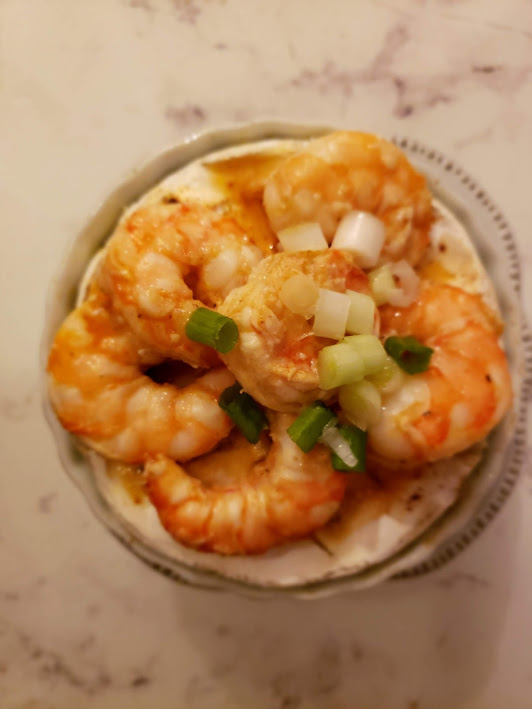 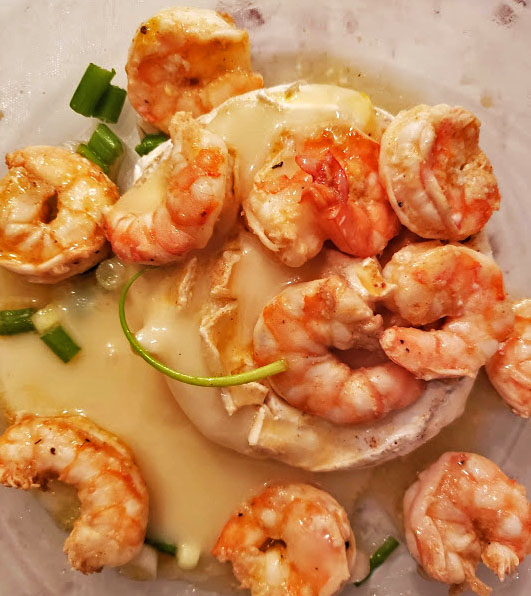 An Instant PotLuck near death experience. 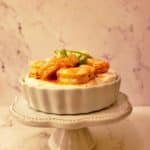 Based on the original recipe from Popeye’s in Lake Geneva, Wisconsin, here’s my take on making Death by Brie in the Instant Pot. It’s decadent, and easy to make… 5 minutes, and the perfect appetizer to serve at your next party. To die for.

Combine all the ingredients in an oven safe bowl.

Score the brie… or poke holes in the cheese during cooking.  After cooking, when the shrimp mixture is poured over it, it seeps into the brie.

Place a trivet in the IP and place the oven-safe bowl of shrimp on the trivet. (Doing the PIP, Pot-in-Pot method)

Add another trivet to create a space and place the brie in bowl on top of that trivet.

Close the lid to the Instant Pot and make sure the valve is sealed.

For frozen shrimp, I used 5 minutes, if thawed, set the time for 3 minutes.

When timer goes off, do a quick release.

Assemble by placing the shrimp and garlic, herbed butter over the brie.

Dice up some scallions and tomatoes and sprinkle on top.

Serve with crusty bread or crackers.

I cooked this as a Pot-in-Pot recipe (PIP) as I wanted the cheese and shrimp to cook separately and assemble it after. 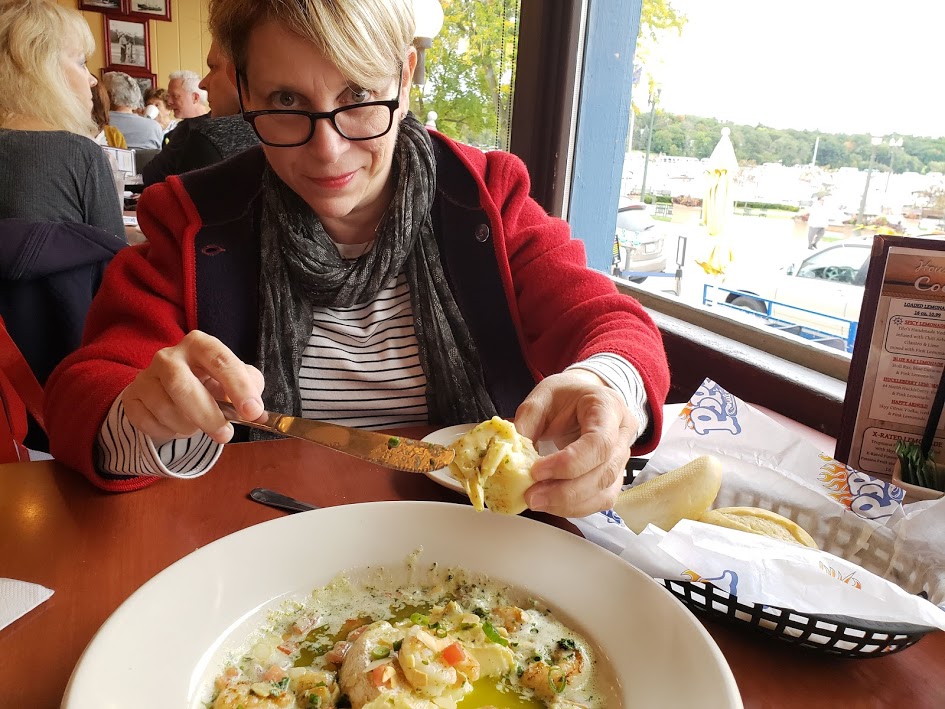 Yes, I am going to finish this.

Here’s a promo code for 10% OFF your order on any of our products: BRIE10

And please, follow me on PINTEREST… the place where I go to look for a recipe and end up considering which Tiny House I should buy.

For another cheesey recipe — not quite as decadent, here’s my favorite Cauliflower and Artichoke Dip 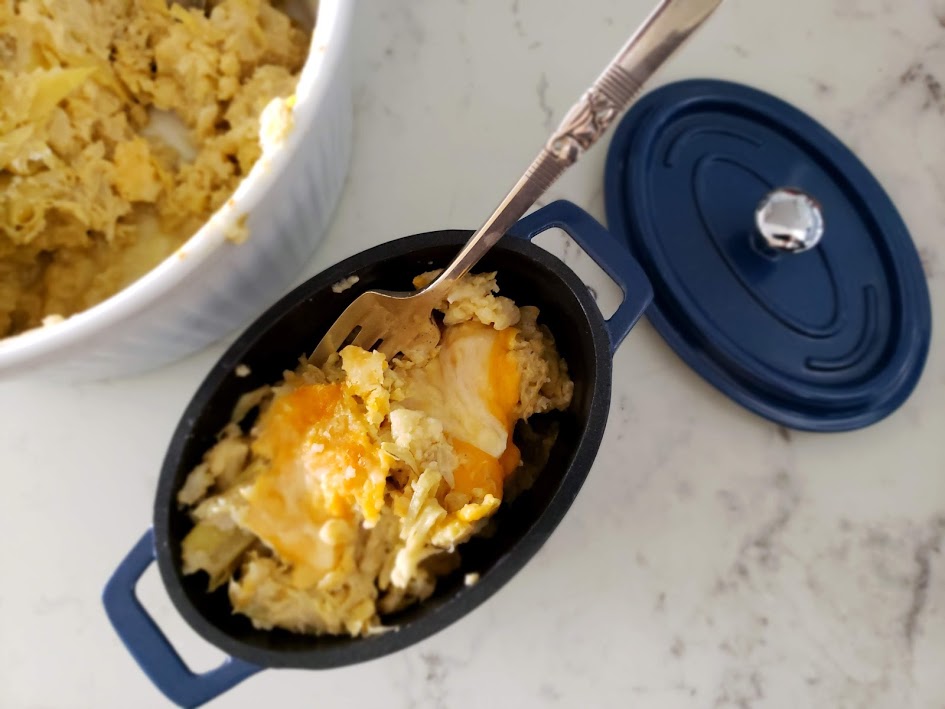 3-cheese Cauliflower and Artichoke Dip.When you share or gift your homemade food, it deserves to be served in something better than an old Cool Whip tub, right? Here’s our new Make It & Take It Containers… personalized food storage. After all, you made it, who else’s name should be on the label? 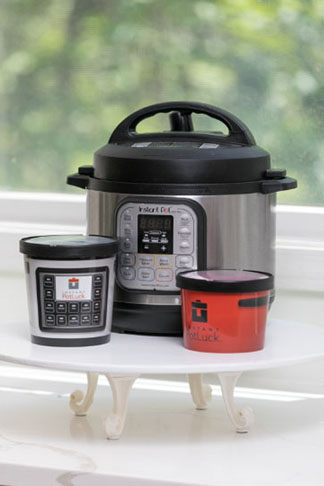